Cooking and travelling, some local travelling and some not so local, have been an integral part of our journey. In fact as we were working on the Okra video, I took a solo bus trip from California to Colorado. I did not want to fly – it feels congested in an airplane. I did not want to drive – it is lonely to drive long distance alone in a car. I wanted to be with people, yet free to see the sights and savor the sound of the surroundings. It happened in one early April morning. When I arrived at the bus station it was still dark in the dawn and the city was asleep. 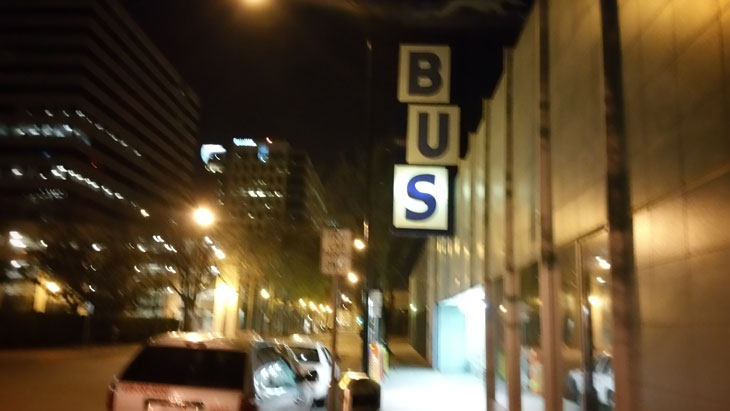 When my friend dropped me off in front of the downtown station its door was just being unlocked. The station manager, that’s who I thought he was, carrying a big bunch of keys from his belt looked half-awake. Bus station managers in America don’t get help like they do it in India. Certainly it was not in this station early in that morning. The waiting room was pretty empty. Passengers started arriving slowly. A group of four youths: two men and two women, looked East European, but when they spoke they sounded German. Their hair were all disheveled and their eyes looked sleep deprived. Another group of three young Latino men each came with a large luggage. I thought they would be going to Mexico, like we most Asians do when traveling to our home country carrying large suitcases full of gifts for friends and relatives. The station manager helped them weigh their luggage. I was unaware that bus travel has also weight limitation. It should – I just did not know. I have not traveled in a bus for a long time now. When the manager talked about the destination of the Latino passengers, I recognized that they would be traveling on a different bus to San Louis Obispo, a California seaside town, not far from here and certainly not to Mexico. I was surprised how wrong my stereotyping was. The bus I would be traveling in arrived from Los Angeles. And after 15 minutes of stop over we would start by 6:10 am. But the bus was 20 minutes behind schedule to start but when it started the driver announced that he would be able to cover the time on the way. This part of the trip would take me to Oakland via San Francisco. 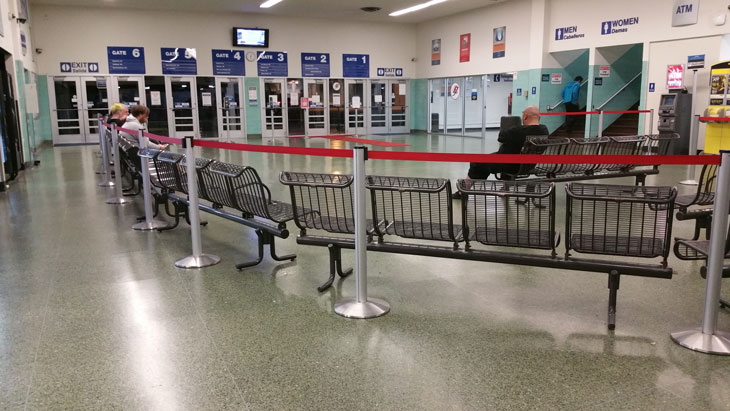 In the bus I sat in the front, next to the driver, so that I could see the street view through the wide windshield. It was a little different feeling for me. At home I drive my own car all the time. But that day I was not driving. I was sitting behind the driver to see the surroundings of the road. 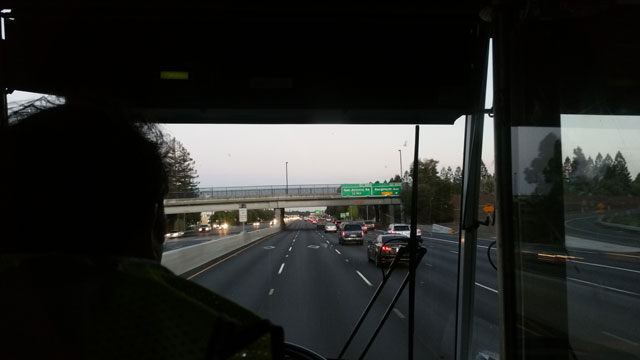 And in another hour or so when we arrived in San Francisco, the sun was up. 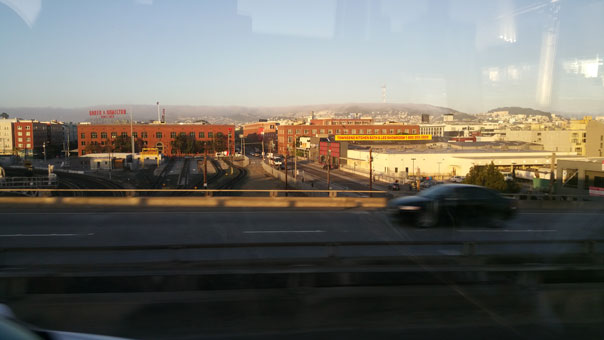 The stop-over there was about 15 minutes. Most of the passengers got off at San Francisco. A few passengers took the quietness of the bus to sleep a little better – they must have had uncomfortable night for the long trip from Los Angeles. The bus drove on the upper level of the Bay bridge. And workers inside hanging capsules were working on the giant steel pillars.
“Pretty dangerous,” I commented spontaneously looking at the workers.
“It sure is,” the driver sitting in the drivers’ cage, in front of me replied. I did not expect any response from the driver at all. It was the first time, while on this Bay bridge from San Francisco to Oakland that I got to talk with him.
“I know they are working on the north span,” I said.
“We will reach there soon.”
“Do you drive this route everyday?”. I got bolder.
“3 times a week,” replied the driver, a middle-age Latino gentleman, with black hair and thick mustache.
“From LA to Oakland?”
“Um, usually. But not always.”
“You mean you drive in other routes as well?”
“Yes. All starting from LA, though.”
“But only three times a week?”
“That’s what I get in a week.”
“So you drove whole last night.”
“Yea. Now that I drop the bus at the station I go to the hotel to shower and sleep.”
I paused a bit, wondering if I was becoming too intrusive.
“Who pays for the hotel?” I went ahead anyway.
“Oh, the company does.”
“And food too?”
“Yes. But then I drive the bus back to LA in the night.” He thought for a while. “And to-morrow I would be home with my family.”
“So you live in LA, I guess.”
“Yea. Not far from the station.” He braked the bus from hitting the car in front. “Must be texting!”
“Yea,” I laughed clumsily. “The modern disease.”
“Yea. I see this all the time.”
I looked through the window to see the Golden Gate bridge further west. Bathing in the morning sun. 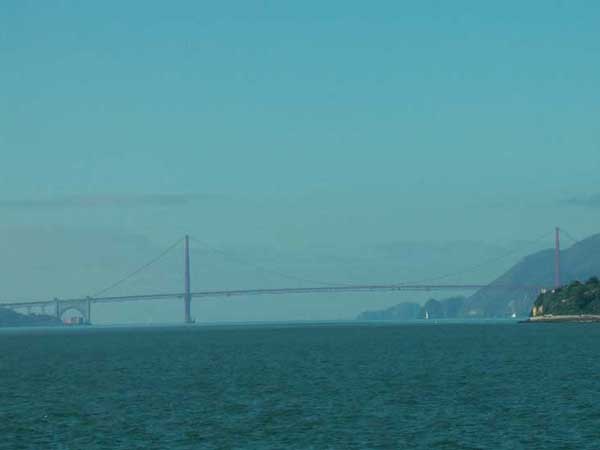 “I like to take this bus up north someday,” I mentioned.
“You can,” he answered matter-of-factly. “ You can go all the way to Canada.”
“Have you been there.”
“Yes.” He bend his upper body towards me, as if to show his sincerity to our discussion, without taking his eyes away from the road. “Up to Vancouver.”
“Vancouver?” I felt excited.
“Yea.” But his enthusiasm seemed diminished. “The Canadian immigration in the boarder is a lot of hassle.”
“Why so?”
“Asking too many questions!”

The bus took an exit from the highway towards the downtown high rises. “Look, I am a bus driver driving the bus up there and then driving it back down again.” He spewed out his frustration. “I’m not going to stay up there!”

The bus took another sharp left turn after the over-bridge.

The bus had then slowed down. In the intercom the driver announced that we would be arriving at the Oakland bus station soon. And that would be the end of this route. He suggested that passengers contact the information desk at the station for their connecting trips. “It is a pleasure serving you,” he announced. “Thank you and hope to see you again!” The bus entered a parking lot of an old large building, where other buses were parked. This would be the Oakland bus station. A few passengers got up with their belongings to get off. I was not in a hurry; my next trip would start in another hour and a half (cont.)

Our okra curry or Dharos torkari, in Bengali, is a simple dish of okra with spices. It is a dry dish, served with rice or roti, alone or with daal. In fact, the recipe is so easy that you can use your microwave. Not only does this cut down cooking time, it avoids deep frying the okra, so it is healthy too. 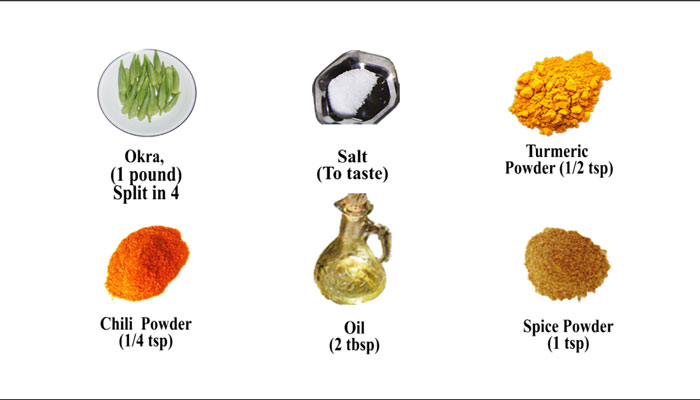 The recipe has 3 basic steps:
Cut the cleaned okra lengthwise into quarters.
Mix it with the spices and oil.
Then cook it in the microwave to desired level of browning.

Begin by cutting the okra lengthwise. Add salt, turmeric powder, red chili powder, the spice mix, and the oil. Toss the okra to coat it in the spice mix. Transfer the okra into a microwave-safe shallow dish. Spread them evenly. Microwave on high for seven (7) minutes. Take the okra out of the microwave, and stir the dish to see how close it is to being done. Microwave for about another 7 minutes.

Depending on microwave wattage one may need to adjust the length of cooking.

Serve the fried okra with chapatti, luchi or rice. 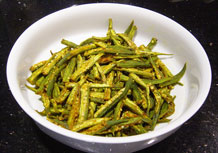